BLOX Racings Oil Pan Baffle is designed to prevent oil from sloshing inside the pan. The unique design creates three chambers within the pan, with the largest surrounding the oil pump pick-up. This ensures that the enough oil volume is present to prevent starvation during hard driving, cornering and racing conditions. With continuous oil pick-up, critical engine lubrication is maintained.

The oil pan baffle is manufactured using 16-gauge aluminum and features stainless steel rivets. The baffle is bolt-in and is easy to install.

BLOX Racing LMA (Lost Motion Assembly) is a necessary upgrade when your OEM lost motion assembly has become old and worn and starts making clicking sounds. Although the OEM had introduced a better... 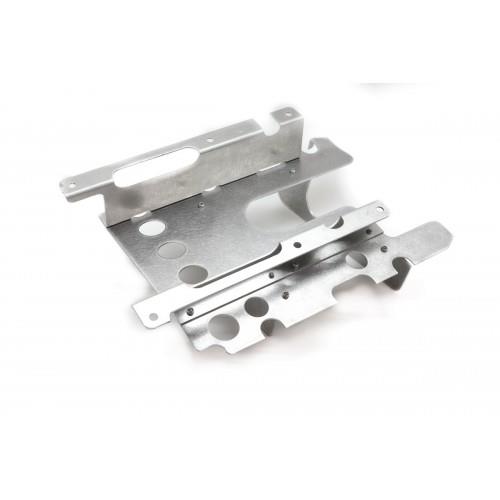 IN STOCK, read more below!Per PHR's own website, 2JZ oil pumps are on a worldwide backorder (and they have been since spring of 2021). Due to oil pump shortages, PHR will modify your new oil pump for...

This kit is proven to add 8-10rwhp more than a regular intake alone such as the HKS Super Mega Flow. This is the complete system for Supras without any kind of aftermarket intake system. This kit...

Call for pricing  All the glory, none of the flaws. Part of the Sound Performance Signature Series Product Line. SP Racing F1 manifold and F1 Turbo kit for the 93-98 MKIV Supra, collaborating with...

Clean up your engine bay and replace your OEM hood prop with our gas hood strut kit. These will make working on your project less of a hassle and and overall easier, being out of your way and...

Tomei Oversize Oil Pan SR20In drifting, circuit racing or drag racing, the higher G forces of both vertical and horizontal will cause bad oil circulation due to the oil pickup not having adequate...